A practical guide to Kitesurf in Boracay

Can you kitesurf in the Philippines? Of course! Boracay is the most popular destination for kitesurfing, and Bulabog Beach offers plenty of opportunities for both beginners and advanced riders. There are several kitesurfing schools where you can hire instructors and rent equipment, if you haven’t brought it, for about € 40 a day.

Best time to Kitesurf in Boracay

The best time to kitesurf in Boracay is during the Amihan, the wind that runs from mid-November to March. Even so, during Habagat, it is possible to practice it on the other side of the island (White Beach), as the wind changes direction. Of course, keep in mind that at Christmas, Chinese New Year or Easter, there will be many people.

Boracay is located in the north of Panay Island, in the central Philippines. This white sand island is barely 10Km² and offers perfect conditions for kitesurfing, possibly the best in all of Asia. Today it is also one of the main tourist attractions in the Philippines thanks to its beautiful beaches, the excellent conditions for practising all kinds of water sports, its wide range of restaurants and nightlife, as well as an excellent tourist infrastructure.

The island has about 30 beaches. Playa Blanca is one of the best-known thanks to its spectacular sunset and its massive range of restaurants and all kinds of entertainment. On the other hand, Bulabog beach, just on the opposite side, is ideal for those who practice kitesurfing.

The natural beauty of the island together with the beautiful tourist facilities in the area, make Boracay one of the most idyllic tropical destinations where you can spend a sun, beach and kitesurfing vacation. 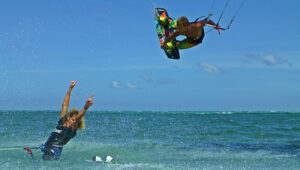 This island has the most popular Kitesurf spot in the Philippines: Bulabog Beach. The reef forms a shallow lagoon reserved exclusively for kitesurfing. From November to April the wind blows continuously side-onshore, with force between F4 and F7.

The Bulabog lagoon measures about 2.6 km and is protected by a coral barrier, making the spot very calm and without waves. It is ideal for beginners and intermediate levels due to its shallow waters and flat sea. In the same way, for those more advanced Kiters looking to get new maneuvers, it is also highly recommended.

Boracay closed to tourism and to kitesurfing: is it worth a kite trip to Boracay?

This is one of the questions we get the most when travellers start designing their itineraries in the Philippines.

They have heard controversial opinions about Boracay, and the doubt is completely normal. Not surprisingly, the island closed on April 26, 2018, and remained closed to the public until October 26 of the same year.

This closure was carried out to rehabilitate it since faecal bacteria had been detected in the waters of the famous White Beach and Bulabog Beach and the phenomenon of green algae on the beaches was increasingly common. Although the latter is a natural occurrence every Filipino summer, the increased frequency is said to be a symptom of poor water quality and pollution. Be that as it may, the exponential increase in tourism, which in 2017 reached the figure of 2 million in Boracay (an island of just over 10 square kilometres), and the growth of the tourism industry without measure and inconsiderate with the environment caused that even the president of the Philippines, Rodrigo Duterte, made some statements in which he classified Boracay as a sewer. Can you imagine kitesurfing among all that shit?

For 6 months, the island was completely closed to tourism and only the inhabitants could enter. Those businesses that did not manage waste correctly have been closed, and other rehabilitation projects have been carried out on the island to make it more sustainable. Even so, even a couple of years later, the rehabilitation work continues, and the island is still a bit ‘upside-down’—however, nothing really considerable to enjoy kitesurfing in Boracay to the fullest.

Island hopping in Boracay usually includes Crocodile Island, Tambisaan Beach, several snorkelling spots and other beaches like 2. 2. Puka Beach
White Beach takes all the spotlight, but if there’s one thing you have to do in Boracay, it’s spending a few hours at neighbouring Puka Shell Beach.

Located in the north of the island, the beach is named after the “puka” shells, beautiful spiral-shaped shells that you will find everywhere. Remember, don’t take them. Not only will you be damaging the environment, but it is forbidden to remove both shells and corals from the Philippines. Be a responsible tourist.

The waters of Puka Shell are usually relatively calm, although it also depends on the wind that blows. Here, as there are no hotels, only a few reggae-style stalls that put out loungers and serve you drinks, the atmosphere is usually more relaxed. We advise you to walk to the opposite end of the road, and you probably have the beach to yourself.

3 –  Jump from Ariel’s Point
Are you feeling strong emotions? Then put Ariel’s Point on your list of things to do in Boracay. It is a point near White Beach with several platforms where you can jump several meters high, precisely at 3, 5, 6 and 15 meters.

Diniwid Beach has a more backpacker vibe and is usually quieter. This beach is only 200 meters long, but we like the landscape of cliffs around it and there used to be a very cool bar called Spider House, from which you could see beautiful sunsets. Now, unfortunately, it has closed, but, even so, we recommend you visit this area of ​​the island.

5- Drink one of the best shakes in the Philippines at Jonah’s
Yes, you read it right. Located at Station 1 in White Beach, don’t forget to have one of Jonah’s famous shakes, Boracay’s best-known shake joint.

6- Enjoy the night of what they call the “Ibiza of Asia”.

If you travel to the Philippines with friends, want to meet people or have a good party, Boracay is your place. Of course, keeping distances with Ibiza. Here you will find many bars and night clubs where you can spend a hilarious night, but be careful if you are planning to kitesurf next day (you don´t want to end up with a hangover at the beach right?