The ultimate guide to kitesurf in Ibiza

Did you know that Ibiza is a top destination to kitesurf? Yes, what you heard, in Ibiza you can also do the sport you like the most: kitesurfing! The island of Ibiza is a spectacular place for kitesurfing in spring and summer with thermal winds and in winter with strong winds with storms. The problem is the prohibition on beaches in the bathing season, and you can only practice kitesurfing from November to May.

The kitesurfing season in Ibiza

The winds change direction more to the West, Southwest, Northwest and North that can vary between 15knt and 30 knt.

The thermal winds in winter do not work, but they are quite strong since we depend more on storms. The most common kite measurements are between 5 and 8 meters.

The coldest months are January and February, with an average temperature of 15 degrees always depending on the wind direction; If it comes from a south-west direction, it is a fairly warm wind where we can reach temperatures of 20 or 22 degrees. When the wind is north, it can drop up to 12 degrees.

In winter there is no fixed beach, since depending on the direction of the wind we move to one beach or another. These are the different spots we have. 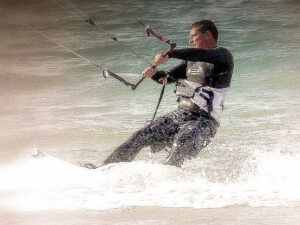 What are the main kitesurfing spots in Ibiza?

In order you can enyoy the ibizian kitesurfing spots to the fullest we have created this list with the top kite spots in Ibiza. We hope you like them!

It works from October to April with winds from the west. The beach is long but narrow, and the direction is onshore with the flat sea a bit choppy. For all levels

It works with Northwest wind. It is quite small, and the direction is onshore with waves and only for experts.

It can only be accessed from the Arenal beach or es poet, and you have to get a 15m upwind, but it’s worth it. It is a pure spot of perfect and orderly waves to surf with a side wind and a wave breaking from the left. The best surf spot on the island. It works with West and Northwest from 20 knots. Only for experts since the wave goes around the rocks and if you fail, you can have problems.

It is one of the most beautiful beaches on the island, but the most complicated and risky spot, due to its strong currents. It has a good wave to surf, as long as you don’t make mistakes. It runs on a west-southwest wind, and the riding beach is tiny. Level only for experts and with medical insurance.

This beach works with a south wind. This wind is not very common on the island, so it is hardly sailed. Onshore wind and waves. Medium level

It works with a Northeast wind and is another surf spot. Here the wind is left side on. The beach is large, and the waves are not orderly and break irregularly, but it is good to surf. Expert level.

The beach of en Bossa

It works with winds from the East and depending on its intensity; good waves are formed for surfing. If the wind is light, you sail with choppy and the direction is left side on. It is the largest beach on the island, and it is for all levels if the wind is light. You cannot navigate in the southern part of the beach, because it is prohibited from the airport.

It works with Southwest wind. It is the quintessential freestyle beach since the sea is flat and with a constant wind as long as the sky is clear. The beach is not very big, but we have the Cala Martina restaurant open all year round, where you can eat or drink while watching everyone sail. Spot for all levels. 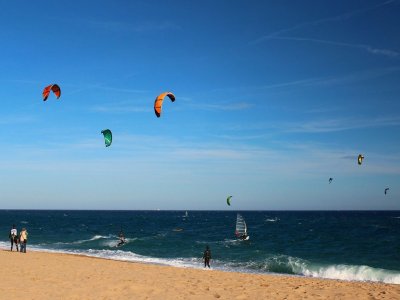 Ibiza holds some of the best kite spots in the Balears island. Although kitesurfing is prohibited in summer, many companies organize kitesurfing trips from their boats offshore. If you have the kite in your veins, we recommend that you contact one of these kite schools to be able to kite in Ibiza all year round