Boa Vista is a wild island of Cape Verde where the wind is almost omnipresent, with beautiful beaches and spots, it is an ideal kitesurfing destination for all levels of practice, from beginner to expert in waves. It is the trade wind, the northeast wind, which prevails 75% of the time from October to May. From June to September, the wind is random, it is not the right time to come and sail in Cape Verde. The spots are varied between the bay of Sal Rei, Ervatao or Ponto Antonia. The bay is accessible to all, the water level is flat and sometimes, pretty little waves break along the beach.

Ervatao is not a kite spot that you come across, or rather if, after a 4×4 trip, around a village, at the foot of an oasis, a pretty wave that breaks to the left, a terrestrial and aquatic paradise for kitesurfers who love good wave riding…. Shorts are a must, but shorts are good on windy days, a 3/2 full for those who are chilly or those who want to stay in the water for a long time. The Cape Verde archipelago is characterized by a dry tropical climate. Throughout the year, temperatures are high during the day and cooler in the evening. The water is at an average of 24 ° C.

A small rainy season is observable from July to October but this precipitation manifests itself in the form of short showers. With its long sandy beaches, Boa Vista is also known as Dune Island and is considered one of the most exotic islands in the Cape Verde archipelago. Boa Vista is full of contrasts, with hot and arid personalities, battered by the winds and often forgotten by the rains, a piece of Sahara in the middle of the ocean … This island is special and still preserved from mass tourism.

What is the level required for a kitesurf stay in Boa Vista in Cape Verde?
All kitesurfing levels can navigate and progress on the Boa Vista spots. From flat for beginners to waves for lovers of waveriding, there is something for all tastes and all levels.

What are the temperatures at Boa Vista in Cape Verde during the kitesurfing season?
From January to May, during the ideal period for a kitesurf stay in Boa Vista, the temperatures vary little during the day with around 25 degrees (beware, the evenings can be cool), and the water hovers around 24 degrees on average. ‘year. 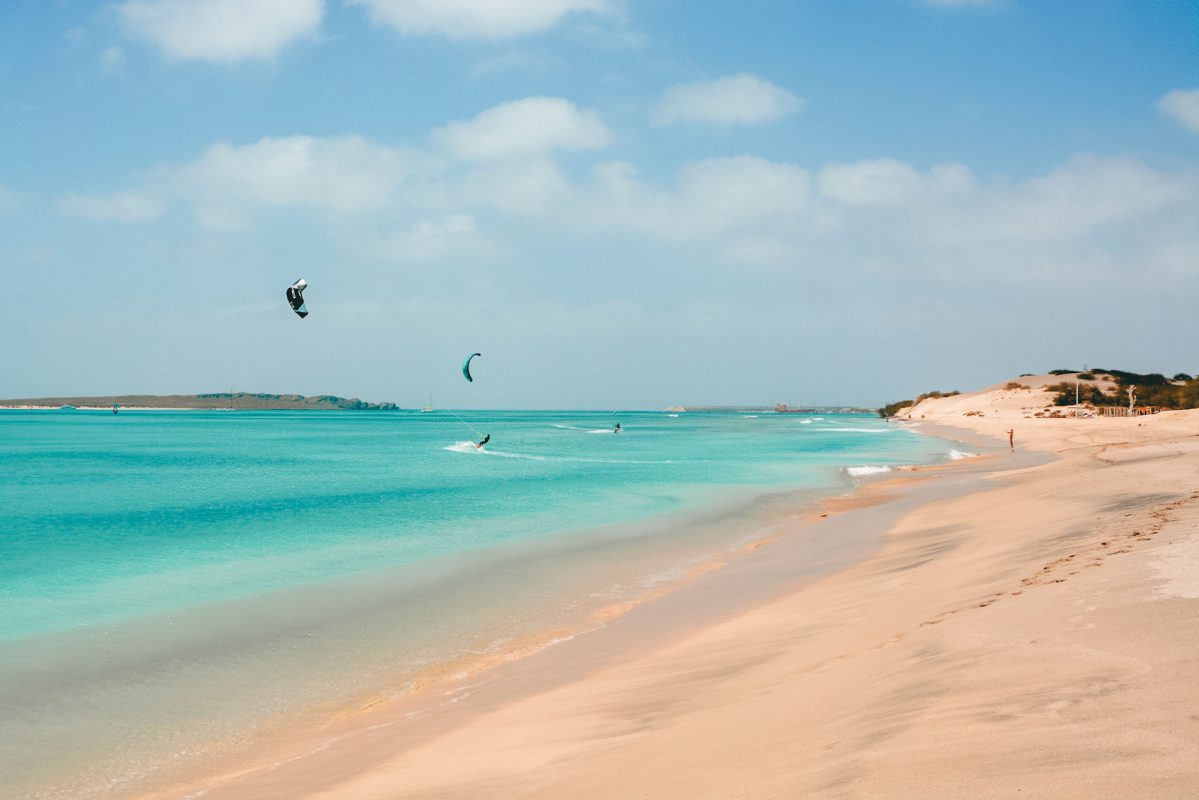 There are 3 spots mainly in Boavista for kitesurfing

Laguna or Turtle Bay: formed by the reef is where all classes take place. Ideal to learn because it stands on much of it. Located just behind the main beach, the club displaces the students, although you can also walk there (about 20 min). With the north swell or swell, waves of up to 2m are also formed.

Flat water spot: very close to Sal Rei and where the main kite club equipped with the latest North equipment is located. This spot is protected by a small island located 1 km away and which blocks the waves, also ensuring that there is not even a shore wave. It is also a very shallow area (no more than 2m depending on the tides). The cros off shore wind makes it only recommended for those who can gird without problems.

Wave spot: Although there are many wave spots scattered around the island, the main one is right in front of where the second club is located. The waves vary from 1m to 4m depending on the swell.