A Practical Guide to Kitesurf in the Philippines

The Philippines is an island country in Southeast Asia located in the Pacific Ocean made up of around seven thousand islands. Its islands, mostly covered with a dense tropical forest, are rich in natural resources, hosting one of the best biodiversity in the world.

Some of the best beaches in the world are found in the Philippines. It is about vast expanses of white sand, warm turquoise waters and massive coral reefs, being a unique place for diving and scuba diving.

The cities of this country offer spectacular contrasts, from huge modern skyscrapers to humble dwellings of the people of the towns. Its people, hospitable and cheerful, keep the character of this area alive, and its cuisine is considered delicious since it has taken the different influences from which it has been nurtured over the years.

Due to its privileged position, it has a maritime tropical climate that is usually hot and humid. There are three seasons: the hot, dry season from March to May, the rainy season from June to November and the warm-dry season that covers the months of December to February.

A trip to the Philippines can be a unique adventure not only because of the exotic nature of the country, but because it is an incredible place to discover new cultures, landscapes and rest on the best beaches.

The Philippines offers the best conditions for kitesurfing. There are a total of 7107 islands, and many of them have beaches to practice kitesurfing in any of its modalities, be it freestyle, waves, speed …

There are countless spots in the Philippines for kitesurfing, and more information about new destinations appears on the internet every year.

Due to the difficulty on some trips, here we are going to recommend some spots that offer the best wind conditions and guarantees.

The windy season in the Philippines runs from November to March. In these months the prevailing wind is from the east and very constant. During the rest of the months, the wind is more irregular.

Kitesurfing spots in the Philippines

Located North of Luzon. The nearest airport is Laoag, with daily direct flights from Manila. In Kingfisher, we will not find the overcrowding of other places like Boracay, and we will find flat water spots, although the quality of its waves distinguishes it.

These spots located in the western Philippines are in an area open to the Pacific Ocean. It is possible to find spots of flat water and waves.

The closest airports are Legazpi, Naga and Virac.

Several companies operate daily flights from Manila and Cebu. From Manila, it is also possible to get to Daet by bus. It should also be noted that Naga is the largest cable park in the world.

Siargao is an island whose eastern coast is open to the Pacific Ocean. Surfing is the king of sports on its beaches that attract thousands of surfers every year. There are countless wave spots and also flat water spots. The best windy months are December, January and February. Wave spots abound for kitesurfing, with all directions and characteristics, although there are also some flat water areas.

Boracay is the most popular kitesurfing spot in the Philippines. Bulabog beach is 100% kitesurfing and windsurfing. National kitesurf tournaments and international circuits such as the KTA (Kiteboard Tour Asia) are organized in Boracay.

The best windy season is from November to March. Although other months of the year it is possible to practice kitesurfing on other beaches on the island such as White Beach, located on the east coast of the island.

The closest airports to Boracay are in Caticlan and Kalibo, where direct flights operate with the capital Manila and Cebu, among other destinations.

In Boracay, there are several Kitesurf centres, which offer courses and equipment rental. They also do kite safaris to nearby islands. We highlight the following:

– Hagabat Kitesurf: Kitesurf centre that teaches kitesurfing courses throughout the year and offers equipment rental.
– Freedom Kitesurfing: With Freedom Kitesurfing, you can hire kite safaris to nearby spots such as Cuyo or Seco aboard a Catamaran.

If you plan to travel to Boracay to kitesurf, we recommend staying near Bulabog beach, since it is not comfortable to walk every day with the equipment to the beach. These are the accommodations we recommend in Bulabog Beach:

On the neighbouring island of Panay is Union Beach, a beach with similar conditions to Boracay, but much less crowded. Many kiters book their accommodation in Boracay and go to Union Beach to kitesurf, escaping the crowds and looking for clean water.

Seco Island is a sandy lagoon in the middle of the sea. The always constant wind causes the water on its offshore side to be completely flat. Seco island is probably the best freestyle kitesurfing spot in the Philippines. The only way to get to Seco Island is by boat. From Boracay, kite safaris are organized every week during the wind season on various boats. Although the cheapest way is to gather a group of 5 or 6 people, rent a sailboat or catamaran, and spend a few days there.

The Cuyo Islands are a small archipelago belonging to the island of Palawan that is located in the middle of the Sulu Sea. The wind blows between December and February almost daily.

The only way to get to the Cuyo Islands is by sea; there are three weekly services from Iloilo on the island of Panay and Puerto Princesa (Palawan).

The shipping companies that operate this route are Montenegro Lines and Milagrosa Shipping Lines. Check the transport file for more information.

On the island of Cuyo, there are two main beaches for kitesurfing. One in the same town of Cuyo, called Capusan beach, with an offshore part and plate water. And another to the north of the island, in an area called El Quijano. The existing reefs stop the waves leaving a considerably flat area where you can practice freestyle.

In which there is a single kitesurfing school that gives courses throughout the year. There are other nearby islands with impressive spots where to practice kitesurfing. But for this, you have to travel by boat or bangka. We highlight:

– Cuyo Explorer: Kitesurfing trips and safaris in the Cuyo Islands.
– Cuyo Windsports Asociation: Kitesurf courses in a safe area throughout the year.

Cuyo is an island that does not receive a large number of tourists, so hotels and guesthouses are not very abundant. We highlight:

– Nikkis Pension: Located in front of Capusan beach, it is the best option for those looking for quality accommodation in front of the beach.

Lakawon is a small 1-kilometre long island located to the North of the Island of Negros. It is a long island of little more than 1 kilometre in length.

In both corners, it has a sand spit where it forms a flat water area ideal for freestyle.

The environment is very striking, being able to see various volcanoes on the horizon.

Despite being a right kite spot, there are no other activities to do apart from kitesurfing, so 2 or 3 days is the ideal time to stay on the island. There is only one hotel on the island that rents out small cottages at 1000-1500php a night.

To get to Lakawon, you have to take a taxi in Bacolod towards Cadiz Viejo, north of the island of Negros. Once there, a bangka will take us to the island. The taxi price from Bacolod should not be more than 1000 php.

Coron is one of the diving sanctuaries in the Philippines. More and more kiters go to the Calamianes (North of Palawan) looking for the wind that is scarce in other areas further south. Any island or coast facing east is suitable for kitesurfing, MMarcilla Bay is located 15 kilometres east of Coron City, on this onshore wind beach there is a rift that stops the waves and leaves a spacious area for freeriding and freestyle.

The nearest airport is in Busuanga. With direct flights from Manila, Puerto Princesa and Cebu. 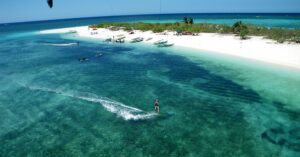