Where to kite in March

A spot of more than 10 kilometres of the extensive virgin beach where we find trade winds as the main engine of kitesurfing and windsurf, the wind is known as the “Chergui,” giving excellent conditions area. The winds are from the right and side offshore in this area, reaching more than 30 knots in summer. The area closest to the town is the area with flatter waters, while the area further downwind is the area with the highest waves.

Essaouira beach is perfect for all levels. It is a fairly closed bay; the wind pushes there in the coast direction where there are no rocks, so it is a fairly safe spot. The wind, a bit gusty, sometimes enters here from the side, moderate in the morning and strong in the afternoon. The waves tend to have little force, very good for jumping or learning to surf: To the left of the beach, near a rock, the wind a little more from the sea and very constant allows the best jumps. When there are no waves at all, it is also a perfect spot for beginners or to sail quietly between the beach and Mogador’s island.

Important … Don’t forget your wetsuit !!! The water here is quite cold !!!

To the south of the city is Sidi Kaouki, with constant winds and a virgin beach. It is not suitable for beginners. It has mixed rock and sand bottoms.

In Sicily, kitesurfing also has its followers and many…. In March, many kites soar through the skies of Sicily like fans of colours.

The western coast of the island between Trapani and Marsala has become one of the most sought after places thanks to its powerful winds.

The immense lagoon Dello Stagnone combines where the air currents run allows for more than 300 days a year to guarantee the winds suitable for kitesurfing. Also, the proximity to Africa makes it a place of warm temperatures that encourage you to enjoy fashionable sports worldwide.

Still, wondering where to kitesurf in March? Then pack your things quick and head to Sicily, for sure you will not be disappointed! 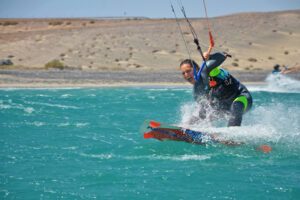 On the beaches of Salinas del Rey, in Santa Verónica, we find a sport, which is not easy at all, it is Kitesurfing, an extreme adventure from all sides, which combines the waves of the sea and the strong breeze.

And Santa Veronica is actually another great spot where to kite in March! How much adrenaline! The kiter it is tied to a harness, mounted on a board and pulled by a kite, the grace is to slide through the water doing pirouettes like a dolphin and flying like a bird. Many people say that it is the most delicious way to feel freedom, that it gives meaning to life. What a better place than Santa Veronica if you are looking to kite in March?

The adrenaline is strong; there are more than 1000 people in Colombia practising this sport, on the Atlantic beaches there are between 70 to 200 people enjoying Kitesurfing, it can be practised in waters with waves or in flat waters, men and women can do it, It is compulsory to know how to swim and respect the safety rules.

One of the most peculiar beaches of Margarita is El Yaque. It is located behind Margarita airport, about 5 minutes from it. Sought by both kitesurfers and families with young children. It has a lot of wind, calm and shallow waters.

We could actually say that El Yaque is divided into two beaches. The first one that you get is the Este beach, which is one of the favourites for families with young children, as it is a safe, flat beach, without waves. At one end of the beach, there is a dock from where children like to jump and where banana rides begin.

Actually, el Yaque is one of the best places in the world to do Kitesurfing in March(without exaggeration). Lovers of these sports come from all over the world looking for the good wind, shallow water and sun all year round. Visitors to the Yaque are mainly European, and the kitesurfing schools are very frequently attended in March by French, English, American or German instructors.

What makes Yaque an exceptional place for kitesurfing? There are several reasons. First, there is the strong and constant wind, which blows most of the year and in particular from October to April. Second, there are shallow waters, which make it easier to learn to windsurf. Then, we can mention the good climate, based on good temperatures and sunshine all year round, since in Margarita it hardly ever rains. 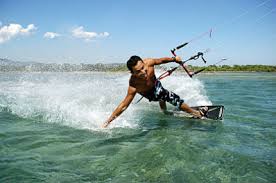 Tarifa is a privileged enclave with wonderful beaches and coves, a place where you can practice numerous water sports, related to both the wind and the waves. One of these sports of recent appearance, about 12 years old, very fashionable in Tarifa is kitesurfing. Tarifa beaches are the most frequented in March by kitesurfers from all over Europe and are undoubtedly a world reference … the mecca of kitesurfing in March. All these thanks to its Levante and Poniente winds, long and wide beaches of fine sand, as well as a great variety of places to kite according to the more or less strong wind. Among all the possibilities of kite destinations in March, Tarifa is our favourite one! 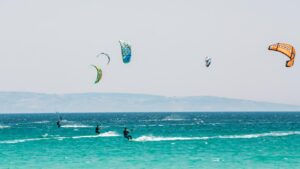 Whether be an African destination like Eassaouira or a Caribbean one like El Yaque, in March there are many kite spots to have a lot of fun. We hope that the 4 spots to kite in March that we have indicated above. We would be delighted if you leave us a comment to know about your thoughts