Where to kitesurf in April

Are you planning a kite trip and wondering what the best kite spots in April are? For that, we have created a guide with the five best kite spots where to kite in April. Hold your breath cause you will need some oxygen after discovering these terrific kiteboarding destinations.

The TOP 5 locations where to kitesurf in April

These are what we consider the 5 kiteboarding destinations must-to-kite in April.

Mauritius is located in the Indian Ocean. This island is practically surrounded by wonderful coral reefs, where you can find an abundant and incomparable marine life.

We recommend you to travel to Mauritius, the perfect destination and one of the best in the world where to kite in April, in its spectacular lagoons of transparent water and protected from the waves of the Indian Ocean and white sharks. In April you will find in Mauritius the constant wind and white sand beaches and strong wind and waves to enjoy to the fullest! Remember, Mauritius is a great kite destination in April! 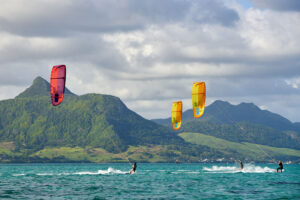 In the centre of the South Atlantic Ocean to the south of the Canary Islands (Spain), the Cape Verde archipelago is located 600 km west of the African coast, at the same latitude as Senegal and the Caribbean. It was a trading centre for African slaves on their way to America and later a major supply stop for transatlantic transport. The Islands achieved its independence in 1975.

They enjoy ideal weather conditions throughout the year for practising kite wind and surfing sports, and April is a great month to kite in Cabo Verde.

Exposed to the trade winds, Sal is located in the extreme northeast of the archipelago of Cape Verde. Uninhabited practically until the 19th century, it takes its name from the sales fields found on the island, as it really is a “piece” of land in the middle of the Atlantic.

Today, the island progresses thanks to tourism, thanks to its immaculate beaches, crystal clear waters and excellent waves and wind conditions that provide unbeatable conditions for the practice of water sports such as kite, wind, surf or diving. The island also has the only international airport in the archipelago, developed before the Second World War as a stop for refuelling between Africa and America. There are three cities on the island of salt; Espargos, the administrative centre and the airport, Palmeira, the port and Santa María, the tourist centre at the southernmost tip of the island. 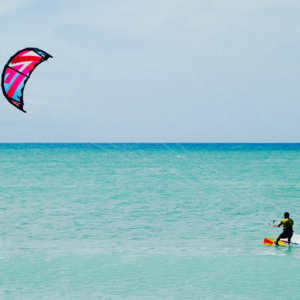 Here you will find a good north wind, and you can get there easily. In the surroundings, you will find hotels and apartments to stay. Conditions range from approximately 14 to 33 knots, so it is not an ideal spot for beginners as gusts are usually strong in the afternoon. 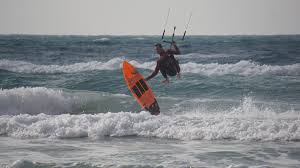 Almería in Spain, an unknown treasure with perfect wind, beach and sun conditions for kitesurfing in April

After Tarifa, we would say that Almería is one of the best places in Spain for kitesurfing with more windy days a year and the best climate in Spain with more sunny days.

The wind usually lasts all day and blows between 18 and 35 knots, depending on the direction of the wind.

Here you have some great kitesurfing spots in Almería and their winds and conditions for your kite trip in April:

The Genoese
This spot is in the Cabo de Gata-Níjar Natural Park, a virgin beach. Sailing with the east wind and with north winds. Wave spot

Zapillo
It is located in the city of Almería in the southern area. It works with a W / NW west wind and a flat water spot near the breakwater and waves on the left. 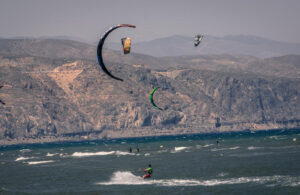 Did you know that Cuba if one of those great destinations where to kite in April? A wide and extended white sand beach just 20 minutes from Havana called Santa Maria would be your favourite kite destination in April. The wind is side on to the beach, coming from the right. The sea with small waves of 1 to 2-2.5 meters or more depending on the conditions and the strength of the wind. Normally the wind is above 10-12 knt. The most indicated months are September, October, November, March, April and May, with many days from 18 to 25 Knts, but all winter there is wind on the coast. 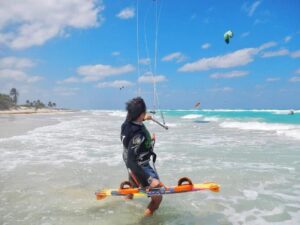 We hope you like the 5 spots we have proposed to kite in April. Actually, there are many other spots where to kite in April, and all of them are very interesting. Check our options to kite in April! If you are a wind seeker, you will enjoy them a lot